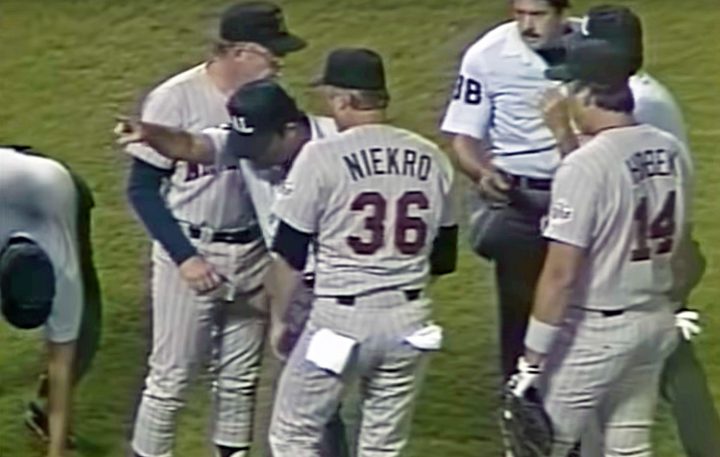 I gotta say, the Astros have some serious stones. To pull what they did in stealing signs using video cameras, cell phones and a trusty garbage can, go beyond any Hollywood storyline. They are next level. But they got busted. And as I scrolled through coverage about the incident (and what could be coming to the Red Sox), it got me thinking of how sheltered I’ve been in my early life for believing this stuff couldn’t possibly happen in pro sports. Kids cheating…maybe. But adults?! And pro athletes!? Oh, the humanity! But there was a very public example of cheating I did witness – even on live television – that had me jumping on YouTube to revisit after reading about the Astros.

I swear I believe I was watching this Twins game on TV. At least I think I was. My beloved Minnesota Twins were playing the Angels. All I know is there was a commotion with the ump and he paid Niekro a visit at the mound. Sports Illustrated has a better memory of this event than I do:

The trouble all starts with a simple called strike from Niekro to Angels designated hitter Brian Downing, when home plate umpire Tim Tschida realizes something’s fishy with the ball. Niekro’s reaction pretty much gives the game away, but he tries to stall and obfuscate even as umpires converge on him and ask him to empty his pockets. He does—and in the process, tries to fling away the emery board (about 1:03 into the video), which the umps quickly notice. Just like that, Niekro gets tossed, though it should have been as much for his bad sleight of hand as for his attempts to get away with scuffing the ball.

It’s comical. Watch the video. But what I don’t remember is the commentary and excuse Niekro tried to give after the game. This stuff is gold and God help the man. He leaned in on it and for that I admire this cheater for being next level. Gold!

“I’ll be honest with you, I always carry two things out there with me,” Niekro said. “An emery board and a small piece of sandpaper. I’ve done that ever since I started throwing the knuckleball.”

“Being a knuckleball pitcher, I sometimes have to file my nails between innings. So I carry an emery board with me to the mound.”

But what about the sandpaper, Joe?

“Sometimes I sweat a lot and the emery board gets wet,” Niekro said. “I use the other as a (backup).”

So there you have it. I remember how raw it was to watch a ‘major leaguer’ get busted on live TV for cheating. Over the years, it wasn’t so taboo (steroids, etc.). But to see the Astros pull such a calculated scam, is beyond words and highly disappointing. Especially for young boys who may be naive as to think this stuff only happened in the movies. It shouldn’t be commonplace. I’m surprised the Astros kept their title. But I digress. Cheating is woven into the fabric of our lives. It’s sad to see with the Astros. And it’s said to see with Niekro.

But man, his case was funny as hell. And a postscript to the story, I was sad to read Joe died in 2006. And where? Tampa, Florida of all places. This story hits all kinds of home. Literally. RIP, Joe. The King of the Knuckleball.

Do you have a memory of any professional sports cheating scandals? If so, re-live the memory and tell us in the comments. Let’s take a trip back to memory lane.