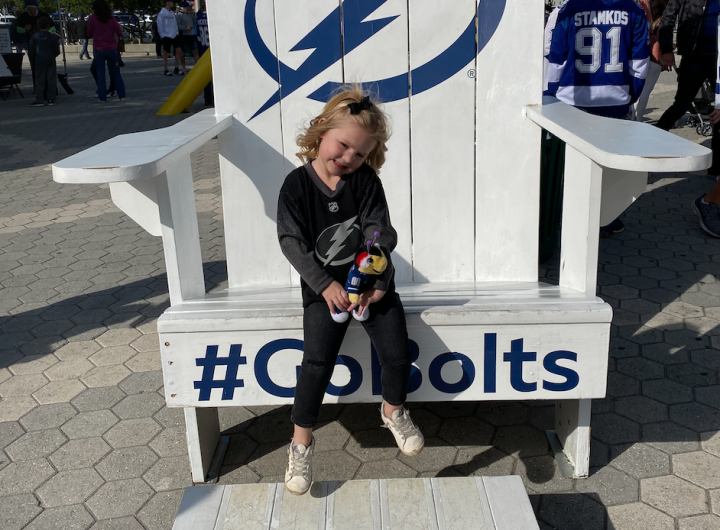 Yesterday was a great day for a matinee. The Tampa Bay Lighting were playing the Calgary Flames at Amalie Arena (which is just a few blocks from our condo). So it was a great time to bring Bella to her first game.

First period. She was loving the energy of the crowd. The horn when the team scored a goal was too much for her little ears and she cowered in her seat. There was some coloring thanks to a coloring book and crayons they were handing out.

Second period. Exited up the stairs few minutes before the period ended to get a jump on some food. Mommy took a bathroom break thanks to her 36 week-sized belly. Bella wanted candy. We settled for a pretzel and cheese sauce. When the lines died down, we got more food. Mom and Dad were starving. Bella tackled a hot dog and monster-sized lemonade. It was back to the seats for the last half of the period.

Third period. Bolts were starting to pull away. Bella was starting to drift away. It’s hard to keep three-year-old’s entertained. We decided to part ways with the game about halfway through the period. It was a long walk home (Uber’d there to begin with). It will be the farthest Tara will walk until the baby arrives. That has been decided.

Overall, Bella was great. She liked the hockey, really liked the food and probably liked Thunderbug the Mascot the most.