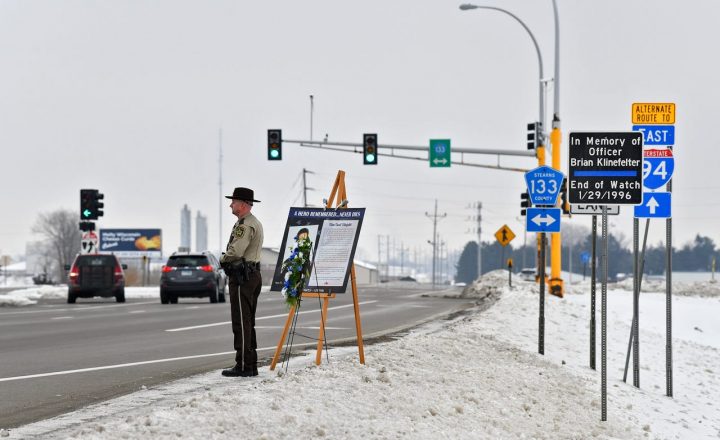 I’ve never been a fan of today’s date. It was this day, 24 years ago that my cousin was killed. It wasn’t a tragic accident or medical issue. It was murder. And it’s still hard to talk about. But it’s good to talk about and remember him because he was a special guy. He helped a lot of people. And he was loved by even more.

I was only 16 when my cousin died. I remember I had gotten out of the shower and headed into say goodnight to my parents. They were in bed watching the 10:00 news. The story had just hit the air that a St. Joseph, Minnesota police officer had been shot. Within seconds from the story hitting the air, the phone rang. It was one of those obnoxious rotary phones that woke the damn neighborhood up when it rang. It smashed everyone out of their dazed and confused state. It was my cousin Sarah informing my parents that my cousin Brian Klinefelter, a St. Joseph’s police officer, had been shot. It didn’t look good.

We scrambled to get ready. The hour drive was going to be a tough one. After the phone call, I don’t really remember what happened. Fast forward to me at my aunt and uncle’s house the next day. I was in charge of taking calls from the media and keeping people informed as to what was happening. Little did I know I’d be pulling valuable lessons about working in the media from this horrid experience. Some reporters were sheer assholes without any comprehension of the grieving process. I can relate now that I’m in this business. But I’ve always made it a point to respect a family that was just crushed with the worst news of their lives.

As for what happened, I’ve recited the story more than I like to. You can read about it here.  And the St. Cloud Times did a phenomenal job reporting the story here. It’s worth a read.

But this day comes around faster than I imagine. Feels like I was just posting about this last year. And that’s what makes me think about this carousel of life we’re all riding on. Take Kobe for instance. 41-years-old. One year older than me. Gone in a second. My cousin was 25 with a newborn. TWENTY FIVE. Incredibly sad and scary to know anything can happen at any time.

I was pleased to see a ceremony was held where my cousin was killed today. It looked cold. Not nearly as cold as the January it happened. It was bitterly cold. Cars wouldn’t even start. But to see the respect and honor these deputies and other law enforcement showed the community, Brian’s family and friends and Brian himself, was wonderful. The ceremony was followed by an honor guard. They stood watch near where my cousin laid that cold night in January…just after 9:00 p.m.

Thank you to the officers who continue to serve and protect. They do it and ask nothing in return. And for some, including my cousin, they pay the ultimate sacrifice.