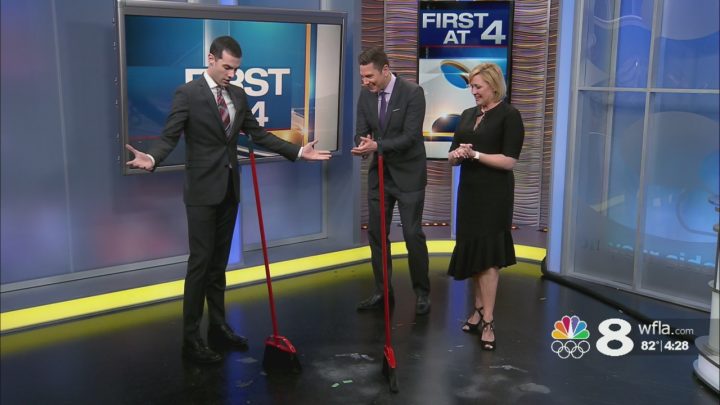 What is the Broom Challenge?

According to Twitter, the Broom Challenge stemmed from some notice, somewhere from NASA that claimed that February 10, 2020 is the only day you can stand up a broom on its own due to a so-called gravitational pull.

My brother sent me a text with a balancing broom in the dining room and left the lights off so it would scare his unsuspecting wife when she came home (nice fella). I thought he’d lost his marbles until I started seeing the Broom Challenge everywhere online. I essentially told him he was a loser and went to bed.

Forced to participate in the Broom Challenge

I thought that was the end of it. But then my producer Emily and director Seth approached my co-anchor Stacie and me with the challenge – to be attempted live, on-air, during the 4:00pm newscast. We both sighed, obliged and performed fairly well considering it was our first (and last) attempt at this latest social challenge.

So if you see a bunch of brooms online standing on end, have no fear. It’s just a good fraction of the population believing that yesterday was the only day brooms could stand on their own. Until the they realized it worked today. And tomorrow. And hopefully never again.

Sweep the floor. It’s dirty. That’s a #BroomChallenge I can get behind.