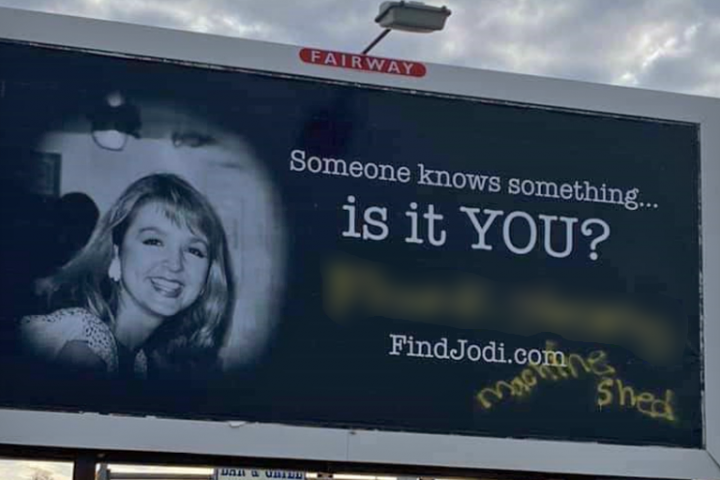 I stay extremely busy. Maybe to a fault. While I have a full time job, I manage to fill every other waking minute with other work, interests and hobbies. One such interest I have always had is missing persons cases. Most of you know that I co-founded a non-profit organization called FindJodi.com, Inc. It all centers around a missing anchorwoman named Jodi Huisentruit. She disappeared while on her way to work back in June of 1995. I never knew her, only worked in the her same market seven years after her disappearance. To this day, her case fascinates me.

In 2003, we launched FindJodi.com. To this day, it’s been the most dedicated resource in her case. A few years ago we put up 4 billboards in Mason City, Iowa – the city where she disappeared. The contract on the billboards ran out after a few months – but one stayed up thanks to the generosity of the company that owned the billboard. 17 months it stayed up, in fact.

Today, that billboard was vandalized and is slated to be taken down tomorrow.

There was a name spray painted on it along with the words ‘machine shed’ indicating (to me) that this person allegedly buried Jodi in or near a machine shed somewhere. The name referenced a previous police investigator in the case. We blurred the name because there are no facts backing the claim so it’s in our best interest not to perpetuate the message. But we did notify the department, the FBI, the DCI and the company that owns the billboard.

I’m sad to see the billboard come down, especially for how long it’s been up and how many leads it’s generated. But I’m confident we’ll put a billboard right back up in its place. But it makes you think about who knows what in the case. It’s incredibly difficult to solve and I personally have been working on it for nearly 20 years. Who knows if it’ll ever be solved. June 27, 2020 marks the 25th anniversary of the case. It would be great to see it end, the family find closure and for us to add SOLVED in big, red letters on the home page of the website.

But until that day, we just keep trying to do what we can to get there.

And it’s a big smile. I ditched cable for YouTube TV. If you read yesterday’s post about upgrading your AT&T devices, you may have noticed I can’t stand dealing with service providers like cable and phone companies. They survive by feeing you to death. Fee here, fee there, added fee, discounted but fee in 6 months and so on. It’s maddening. Surely you’ve been...