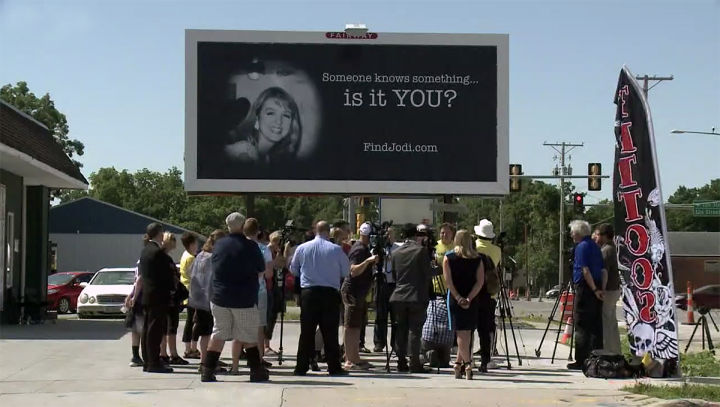 Many of you know that I co-founded a non-profit for a missing news anchor. Her name was Jodi Huisentruit. She worked in small market in Mason City, Iowa. She was abducted on June 17, 1995. And in 17 years of covering, investigating and dissecting her case, I thought yesterday it was about to be solved.

This has happened literally dozens of times. I got into following the case in 2002 when I started in TV. My former boss Gary Peterson and I started looking into the case. Over years, we built a website, a team and now a large effort to uncover what happened. And during those years, things seemed to match up and we thought, ‘this is it’.

Yesterday I got a tip call from someone in Cedar Rapids, Iowa. Jodi worked there before Mason City. This guy knew of our site FindJodi.com and knew that recently there was a billboard vandalized that we had put up. Written on the billboard were the words machine shed. What that meant, we aren’t sure. But here’s how it unfolded yesterday.

Tipster said there was a shed, it was moved the night before by authorities. There were police, FBI, the coroner and archaeologists on scene. They were digging up the foundation under the shed. So you have Cedar Rapids where Jodi worked, you have a shed, you have archaeologists…Oh, and just make this even more spooky is that the house sold in 1995. June 27, 1995 to be exact. The day Jodi was abducted.

My head was spinning. Our team was working in warp speed. We quickly contacted sources that told us (from the inside) that it wasn’t her. So another false alarm. Our newest member Scott Fuller followed up about the process and what it was like for our team.

But man – nothing gets your adrenaline pumping more than knowing that something you’ve dedicated so much time to is about to be resolved, a family so ready for closure is about to get peace and connecting the dots start to form the picture of what actually happened. Only for it not to work out.

It’s frustrating, but it keeps us going. Someday, on some random Tuesday, we’ll likely get the call that this is truly it. And all of this can be over, Jodi can be home, and and those guilty are put away forever.